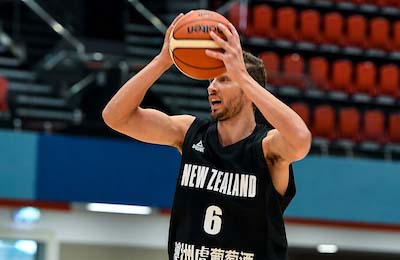 The Canterbury Rams would like to announce the signing of Luke Aston, for the 2019 Sal’s NBL Season. This announcement comes as new Rams head coach Mick Downer’s eighth addition to the team.

Aston was born in Dunedin and played his High School basketball at Otago Boys High School, continuing on to play his college basketball at BYU (Hawaii). Since leaving high school in 2008 he has played for a few regional NZ NBL teams including the Otago Nuggets, Bay Hawks and most recently the Southland Sharks where he played the past two seasons. In the past few years, Aston has been a part of the New Zealand Select team and in 2017 played in the Tall Blacks at the FIBA Asia Cup where New Zealand finished 4th place.

Head coach, Mick Downer is looking forward to working with Luke saying “We are really excited at the Rams to have a player of Luke’s calibre join our team for the season. In the prime of his career and hungry for more success, Luke’s addition bolsters our perimeter player depth as well as giving us more experience and leadership for our younger players.

Lukes championship winning and Tall Blacks experience will be invaluable to the playing group. His ability to shoot the ball at a high level will compliment that talents of our backcourt players such as Naar, Gliddon and Britt who all distribute the ball well. Having another 3pt threat on the team will suit our style of play and should see Luke play a very comfortable and confident role for the team.”

We look forward to having Aston’s experience, leadership and sharpshooting ability for the Rams this season, and we can’t wait to see the big impact he’ll have on the court in 2019!

The Rams are coming off a season in which 6,000 attended the Rams vs Saints game at Horncastle Arena which was a Sals NBL Record Crowd.  The team is looking forward to taking 2 games to Horncastle Arena in 2019.