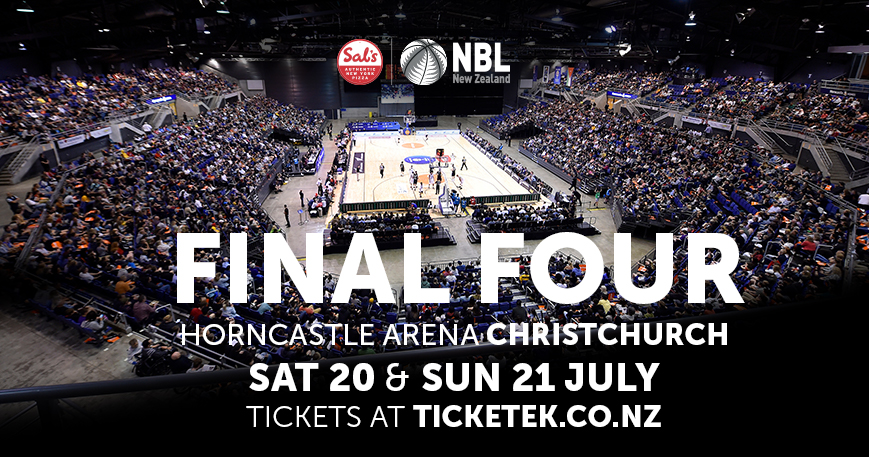 For the first time since 1999, the Sal’s NBL Final Four will be played in Christchurch at the 6000-seat Horncastle Arena between Saturday 20 July and Sunday 21 July.

The event will also feature team training sessions on the Friday afternoon, 19 July. On that evening, the annual League Awards will be held at the Christchurch Casino.

Canterbury Rams General Manager, Caleb Harrison, said he and his team are excited to be hosting the event.

“Horncastle Arena hosted an NBL game last season in front of a sold out crowd of 6000, the highest attended basketball game in NBL history, so we are looking forward to doing the same on both days this July. We are excited to bring a major basketball event to the city and our passionate fans,” said Harrison.

Sal’s NBL General Manager Justin Nelson said Horncastle Arena is the “perfect destination for the Final Four and the city of Christchurch is filled with a passionate sporting community who love big events.

“The NBL has gone to a new level this season. The talent is at an all-time high and the Final Four will no doubt be an event for everyone to enjoy. We expect sell-outs.

“We want basketball fans from across New Zealand, and also our friends in Australia, to book their tickets early and get to Christchurch to enjoy a great weekend of fun. The Final Four is for the fans and we are going to put on a fans-first show, so don’t miss out.”

Ticketing packages for the event include an opportunity for supporters to attend the League Awards night, while there are discounts for fans attending all three finals across the event.

Tickets are now on sale now at Ticketek.co.nz.