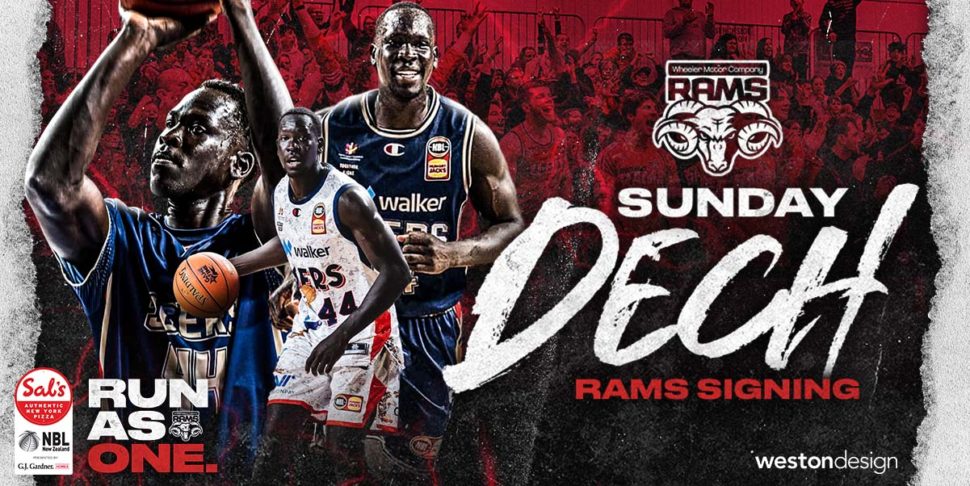 Less than four weeks’ from their season opener, the Canterbury Rams have revealed their marquee import signing for 2022 – two-time NBL champion Sunday Dech.

Coming off a  strong season in the NBL with the Adelaide 36ers, Dech joins a Rams team with a well-established Kiwi core and many names familiar to Canterbury fans.

Dech is the fourth addition to the Rams squad with ANBL experience, joining Taylor Britt, Max Darling and Mike Karena.

His sporting journey, however, started in Western Australia at the age of six, after Dech’s South Sudanese parents emigrated from Ethiopia to Australia.

He enjoyed Australian Rules Football, skateboarding and soccer while adapting to his new home and culture, and eventually basketball as well.

According to Canterbury Rams Head Coach Judd Flavell, “Sunday is a great addition to our squad and will play an exciting role in this high energy team. He is a competitor and plays the game the right way. He has always been known as an elite defender but has been working hard on developing his offensive package, which continues to get better every year. We are also gaining a great culture guy with the natural leadership qualities that every team needs.”

The 6’5” guard adds an uncanny ability to impact the game across all aspects. Dech is currently averaging 11.38 points, 2.25 assists and 4.6 rebounds for the 36ers.

This is not Dech’s s first stint in the New Zealand NBL, after being part of the Wellington Saints 2019 championship-winning side.

Both Dech and Head Coach Flavell are expected to arrive in Ōtautahi Christchurch after the conclusion of the ANBL season. Their final regular season game is slated for April 24.

Follow Canterbury Rams on facebook for our final squad announcement, naming the team’s second import in the weeks leading up to their April 30 season opener versus the Otago Nuggets.

Season memberships and individual game tickets will be released for public sale at 4pm today via Ticketek.  Refunds apply as per Ticketek T & C’s if crowds are restricted due to Covid Alert level however we are expecting a full house for the 30th April, with the next Government announcement on restrictions coming on the 14th April.  Don’t miss out & buy your season memberships and individual game tickets today!