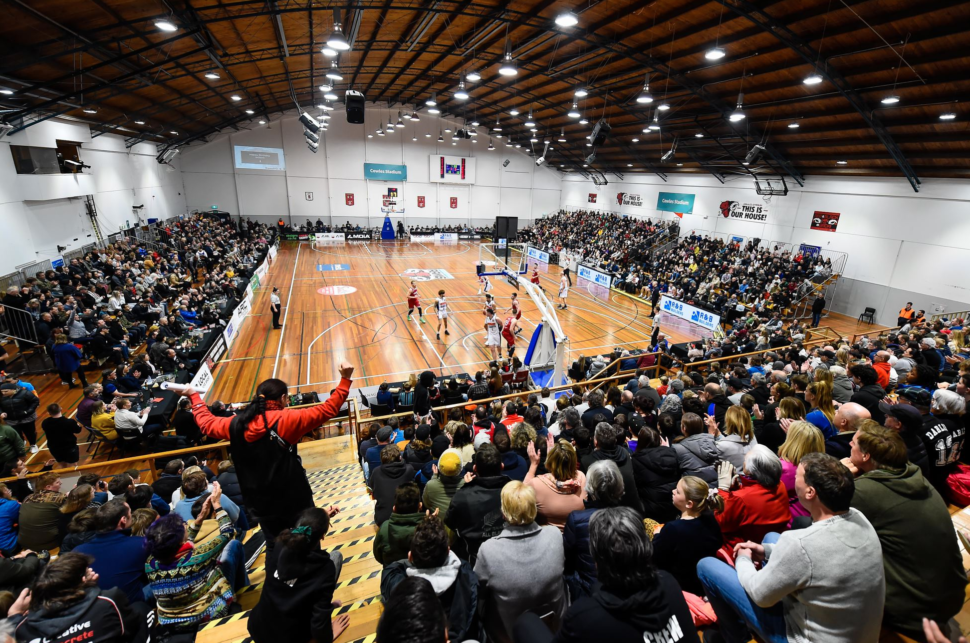 A strong returning Kiwi core and two high-level import additions prepare the Canterbury Rams for a season to remember in 2022.

With the season-opening versus the Otago Nuggets at home this Saturday 30 April, only 200 tickets remain, meaning Cowles Stadium will be rocking once again.

“The Cowles Stadium experience is like no other, and we are taking things up a notch for 2022,” says Canterbury Rams General Manager Caleb Harrison.

This weekend’s game will showcase the magic that Rams home games are renowned for, with dance teams, halfcourt games featuring local schools, half-court shoot outs and competitions throughout the entire game – with fans taking centre court.

“There’s a few surprises in store,” Harrison adds, borrowing inspiration from his years going to Rams games as a youngster in the 90’s and 00’s – especially from the years when the team was owned by John and Leslie Watson, who took game day entertainment to another level in New Zealand.

Many Rams followers who enter Cowles Stadium on Saturday have already established a special connection to the squad this season.

“The Rams have spent term 1 and the school holidays coaching in the community,” says Harrison. “Over 250 tamariki have received coaching from the Rams at junior and senior camps these holidays. The players and coaches have enjoyed the opportunity, and the response has been phenomenal.

“It gives young fans an entirely new perspective, and the experience certainly benefits our players as well.”

Due to the expected crowd size, Rams fans are encouraged to start arriving at Cowles Stadium from 4:30pm onward, to get settled in. Around 5:15pm the lights will go off, and the 2022 Canterbury Rams will be introduced. Fans are encouraged to “wear red and black, to build the Rams home court advantage Cowles Stadium is known for.”  The Rams home games were voted as the best home game atmosphere in the Sal’s NBL last year.

Highlights of the season ahead include:

Taylor Britt and Joe Cook-Green return from stints with the Tall Blacks during the FIBA qualifying window in the Philippines this February. Britt returns for his first full season with the Rams since 2019 after missing last year due to playing for the Perth Wildcats in the Australian NBL and 2022 with the shortened NBL Showdown. Cook-Green missed the 2020 season due to his ACL injury, only playing six games last season. It promises to be a memorable homecoming on Saturday at Cowles Stadium for both local favourites.

Seasoned Rams veterans Sam Smith and Mike Karena add experience to the line-up. Karena spent a season with Head Coach Judd Flavell at Southeast Melbourne in 2021. Karena and Smith have invested a combined seven seasons with the Rams; Karena has also played two seasons in Spain.

Max Darling will return to the Rams this season after completing a stint in the Romanian professional league. Darling is 21 years old and has already played two seasons for the Rams as well two seasons in Croatia, one season in the Australian NBL and one season in Romania.  He was the NBL Rookie of the Year in 2017 and will add a significant force, being here for the majority of the season for the first time since 2017. Darling will join the team immediately after the Romanian season in time for round two.

Jackson Stent returns to the Rams after four years of college at Houston Baptist University. Jackson was part of the Rams’ squad prior to his time in the US, and this will be the first season back after college. Walter Brown will be looking for a breakout season after a good showing in his rookie season last year. Newcomers Hunter Adams, Kaia Isaac and Josh Book will be looking to make an impact, bringing valuable experience from their time with the junior national teams.

Dech and Head Coach Judd Flavell will be joining the Rams for round two after their ANBL commitments; Ryan Taylor will join the Rams in round three following visa approval. Rams Assistant Coach Ben Sheat will be the head coach for the Rams in round one. Sheat was the U17 Canterbury Rep National Championship head coach last year and is currently the Christ’s College head coach. He has been a longtime Rams assistant coach, including Mainland Eagles Academy Head Coach and Canterbury Representative Manager in the past.

“The 2022 season is unique in the way it has overlapped with the Australian NBL and the increased challenges at the border through the pandemic. We are looking forward to the start of the season and will welcome Sunday Dech, Ryan Taylor, Max Darling and Judd Flavell as soon as they join us in rounds two and three.  By going into round one with an all-Kiwi line-up, it allows for a ‘next guy up’ scenario. We really like our group and can’t wait to get this thing underway,” Harrison adds.

The season will open up against the Otago Nuggets on April 30.

A season highlight will be the July 23 Canterbury Rams and Mainland Pouakai Doubleheader at Christchurch Arena.  The Rams own the record for biggest crowd at a NZNBL game with 6,000 in 2018.  Canterbury will be looking to break this record which will also be the biggest crowd for a women’s game in New Zealand.

The league has moved to a final six playoff week, which will take part August 10-13 at Eventfinda Stadium in the North Shore.