WHAT IS THE WAITAHA PERFORMANCE PROGRAM (WPP)?

The WPP is a Canterbury Basketball Rep Academy representative player and coach development strategy involving the systematic and progressive identification, selection and development of players in the Under 15 to Under 19 age groups.

This document serves to clarify the focus, objectives and format of the Waitaha Performance Program.

The primary aim of the WPP is to guide the development of identified representative players and coaches by improving their individual skills, understanding and training standards.

Identified players work on technical, tactical, physical, and team concepts in a dedicated age specific high performance training environment, designed to improve both understanding and performance of each player and coach at the National level.

OBJECTIVES OF THE WAITAHA PERFORMANCE PROGRAM

·       Identify players displaying the characteristics and ability of an elite player at club and school competitions, WPP trials and through the association depth charts

·       Effectively prepare players and coaches for National Championships and beyond, through a well-planned program encompassing on court and off court aspects

·       Prioritise and improve the preparation and development of bottom age players

WHAT DOES THE WAITAHA PERFORMANCE PROGRAM INVOLVE?

The WPP runs across both Term 4 and Term 1, with trials held at the start of Term 4 only.

The WPP consists of two sessions a week; one skills session and one team concepts based session with a heavy focus on individual skill development and introduction and reinforcement of core team concepts consistent with the Canterbury Basketball Rep Academy.

Technical direction for the WPP is provided by the Elite Pathways Manager and works to establish Canterbury Basketball Rep Academy Style of Play philosophies and concepts in line with New Zealand National team best practice.

U15 & U17 WAITAHA REPRESENTATIVE TEAMS

After the end of Term 4, a Selection Camp will be held, after which initial U15 and U17 Waitaha Representative squads including reserves will be identified. Term 1 WPP is then used to further refine the make up of the teams and reserves for final selection.

Waitaha Representative Teams will prepare via team camps throughout Term 2 and will compete in a series of qualifying, seeding and invitational tournaments, with final Waitaha teams attending the National Championships should they advance past the Qualification phase.

The Canterbury Metro Development Program and Canterbury Metro and North Canterbury Teams are further options for players who miss selection in the WPP and/or the Waitaha Representative Teams but wish to further develop and continue playing competitively.

After the end of Term 4, a Selection Camp will be held, after which final U19 Waitaha Representative squads including reserves will be identified.

Waitaha Representative Teams will prepare via team camps throughout Term 1 in preparation for the U19 National Championships in June. 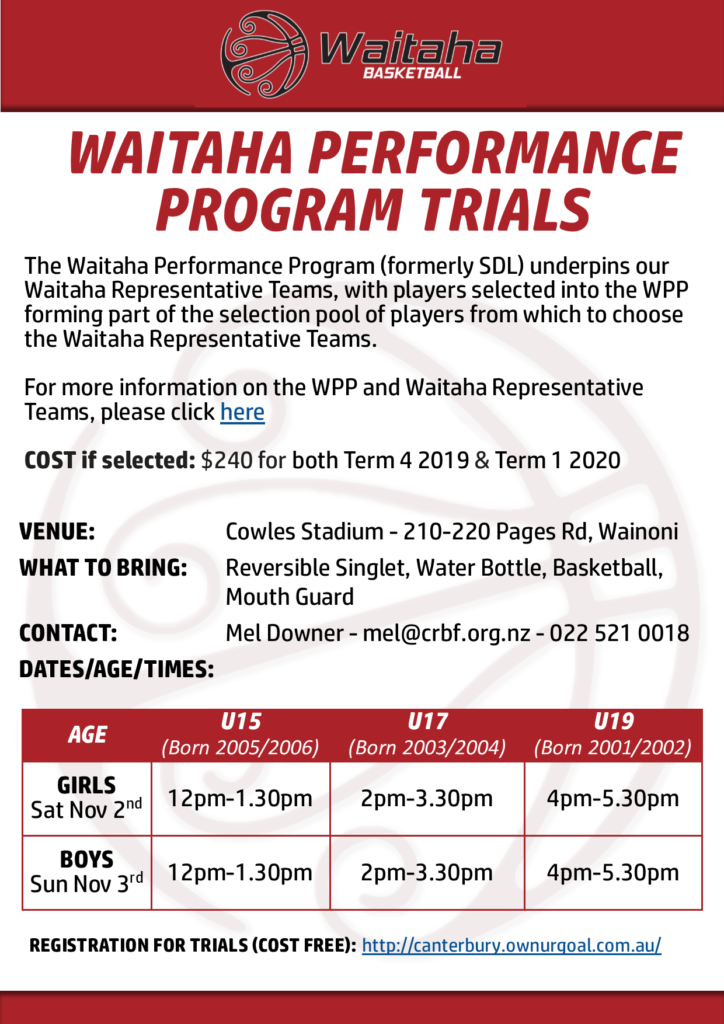